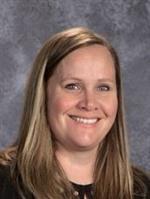 The newest school building in ISD 728 – the Early Education through Grade 8 school in Otsego (dubbed the E-8 building) – doesn’t have its official name yet, but it has its new leader.

Former Westwood Elementary Principal Kari Sampson will leave Zimmerman and head south to Otsego as she becomes the face of the E-8, which will open at the start of the 2017-2018 school year.

Sampson, who has been in the district for more than a decade, wraps up seven years as the leader of Westwood Elementary, a place she was happy to call home.

“Zimmerman has such a small town feel to it. You’re able to build such unique relationships with the people here yet you had the resources you needed and all of the collaboration you could want because you’re part of something bigger, and that’s our district,” Sampson said.

Kari started her career in ISD 728 in the classroom, teaching English and Spanish classes for middle school students before joining the district’s curriculum team, and eventually becoming a school administrator. She’s excited to be with middle school students again, and looking forward to the amazing opportunity of opening a new building.

“It’s a fresh look at things. You can try something new and kind of innovate, set the tone for the future,” she said. “That’s awesome, to have that kind of opportunity.”

“They’ve told me such great things about the Otsego community, and I think it’s going to be great to work closely together with them. I’ve been Chantel’s mentor as she’s joined our district, and really been able to learn about Otsego as a community over the last few months with her,” Sampson said.She also has background experience in the Southern cluster from her days as an administration intern at Rogers High School, and serving all schools there as a curriculum specialist

“It’s going to be great to get going from the ground up,” Sampson said. “And I’m going to miss Westwood, but the school is going to be in really great hands.”

Indeed, former Otsego Principal and Director of Curriculum Erin Talley is returning to the district to lead Westwood through the end of the 2016-2017 school year. A permanent replacement at WES will be interviewed and hired to begin his or her new official position around July 1, if not sooner.