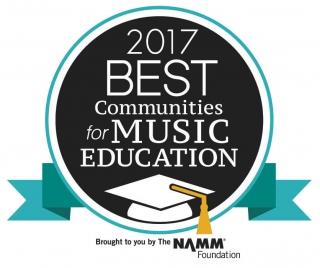 This spring ISD 728 was honored, again, to receive the National Association of Music Merchants Foundation Award, recognizing the district as one of the best in the nation in supporting music education.

This year, just 527 school districts – out of more than 13,500 nationally – received the NAMM honor of “Best Communities for Music Education,” rewarding the efforts of music educators, parents, students and community leaders who “work together to ensure access to music learning for all students as part of the school curriculum.”

Susan Potvin, a member of the district’s curriculum team who headed up the effort to vie for the NAMM award back in 2015-2016, said the award is an honor, but is just the beginning for the district's music curriculum. “But we see that this is just a start, not an arrival point, for music education in our district. This shows that we are in the process of doing some really great things, and that we need to keep working hard to improve our music education programs.”

Music education has shown a tremendous recovery in ISD 728 over the last decade. With many roadblocks put in place during lean budgeting years in the early part of the 2000s, ISD 728  worked closely with school administrators, the communities of Otsego, Elk River, Rogers and Zimmerman and used some innovative collaboration to bring music back. Winning back-to-back NAMM awards is a huge step in the right direction.

“I think our school board, five or six years ago, made allocations to put us on the right track,” Potvin said. Bringing back middle school programming, beginning in sixth grade, was a step in the right direction, she added.

Now, ISD 728 has increased the frequency of classes even as the district has grown. Students are studying to play music, sing, studying music theory and collaborating to perform via the 728 Cadets program well into their high school years.

The future of music in our ISD 728 schools is bright, said vocal music teacher Keri Sollitt of Salk Middle School, but more great work is needed to keep programs on a trend of improvement.

“The biggest thing is making sure music offerings are equitable, optimal and comprehensive for all students,” Sollitt said. “If we’re committed to developing well-rounded students, then we must commit to a broad, varied and high quality curriculum that educates the whole child.” And music education does that, Sollitt added.

All involved are hoping the award brings more exposure to ISD 728’s music opportunities, and the programs continue to grow due to this new measure of success. That, teamed with new performance spaces - such as the Rogers High Auditorium and Zimmerman High School/Middle School Auditorium - spells a bright future. Performance opportunities and state-of-the-art learning space will only foster more growth and, hopefully, additional success for ISD 728 music programs, those involved in programs throughout the district said.