For much of the school day, students in the Elk River High School special education program are in their classroom wing, working on their curriculum, bonding together.

But, the question was once asked, how can these special needs students be a greater part of the high school experience? How can the so-called traditional high school student bridge the gap, and bring in those with Down’s Syndrome, neuro-muscular diseases or other special needs that have them separated from the rest of their class for much of the day?

“The first step was kind of admitting there was a problem,” said Sonja Weiler, Elk River High DECA leader. “We did a student survey, and, without a doubt, the special education students didn’t feel like it was part of the bigger school family. To the tune of like, 85 percent saying they felt left out.”

Enter, with the help of ERHS graduate Emily Novotny, the Elk Buddies Program. 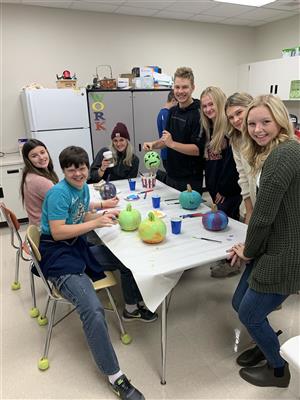 Novotny used the Buddy program – which has been started at other schools around the metro, including nearby Andover – as a way to bridge the gap. However, her high school career has come and gone, and she’s now rubbing elbows with big shots in Washington, D.C.

Who would pick up the ball?

“We saw it as a way to keep something that had been started going, but really use this year to spread awareness about Elk Buddies,” said Linday Strecker, who, with fellow DECA junior Jayna Hager, has taken on the program. “Emily did a great job getting it started. It just kind of fell by the wayside for a bit, and now we’ve picked it up. It’s been growing with every event we’ve done this year.”

Hager said she had heard of Elk Buddies – the program is now in its fourth year – but really didn’t know who was behind it, or how to get involved. The two juniors – with Weiler – brought the Buddy program back under the DECA umbrealla, and have it running full steam ahead once again.

There have been a half dozen events this year so far, including Homecoming Banners, Valentines Day Boxes, a Pumpkin Party and a few others. More events are planned for spring, including a special take on March Mayhem (since that other term is copyrighted).

“If you want to get more from the school community, you have to let people know. Everyone is super busy, but there’s a feeling that you want to be connected to everyone in the building,” Hager said. “We see our special education students every day. How can we be a better friend? This is the way to go.”

With so many other factors dividing kids, finding a program that brought people together seemed like a great idea for DECA, Strecker said.

“There’s a social gap – and it’s not really anyone’s fault. But the goal is for them to feel like they’re not going to a separate school. They’re part of our school. And it’s definitely working. You can see them smile when they see someone they recognize from Elk Buddies in the hallways. There are hugs and high-fives. It’s really made an impact that we didn’t know it could.”

The future of the program is good hands, the two juniors said.

“We’re kind of just getting started, so it’s great that we can keep going with it next year, and really use next spring to find people to pass it on to,” Hager said.