The awards were announced Monday from New York City.

Elk River High, in fact, had two American Vision Nominees – out of the five that could come from the Minnesota region. ERHS senior Marianne Schoen was a nominee for her piece, “Reflection,” a painting that now is in Minneapolis at the Museum of Art.

“To have two American Vision nominees is from our school is outstanding,” said ERHS art teacher Damien Husen. “That sort of recognition is huge for a student.”

Marianne earned a gold medal for her charcoal drawing, her first national award.

Kylie’s art medium was incredibly unique. A stipple – which is the process of lifting and placing down the pen or point in a hard fashion to create an impressed “dot” – takes a lot of time and process.

“It was actually a piece I completed a couple of years ago with micron pens,” she said. “It was part of a portfolio submission – it took me about 50 hours when I first made it.”

Marianne’s piece – created with colored charcoal on canvas – also took painstaking work. “Reflections” is done in a way where the subject is actually upside down. She said the hand that is draped across the body took her more than six hours to create, alone.

“Charcoal is really difficult when it comes to precise areas, so that took a lot of time. You have to get it right, because you can smooth out the larger areas, but it’s more difficult to do the smaller ones.”

Both girls said their pieces were inspired by assignments given by teachers in the ERHS art departments.

“It’s one of those situations,” Marianne said, “where you’re given this assignment and you just want to get it done. But it grows into something pretty unique. I was really kind of trying to find something that would bring people in and give them a different viewpoint from what I’d normally create.” 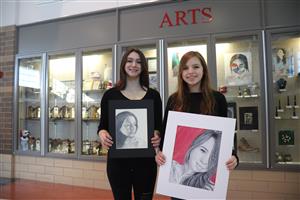 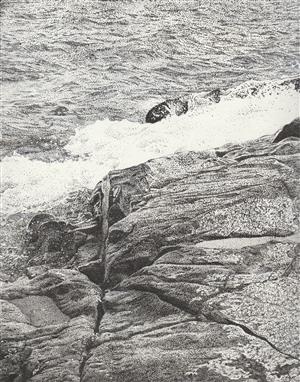 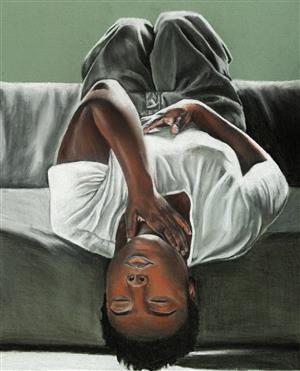